Ernest Hemingway is a highly esteemed American author. He was born in Cicero, Illinois on July 21, 1899. Hemingway served during World War I and also worked within the journalism sector prior to publishing a short collection entitled In Our Time. His most famous works include For Whom the Bell Tolls, A Farewell to Arms, and The Sun Also Rises. He is also well known for The Old Man and the Sea, the novel for which he received the 1953 Pulitzer Prize. In addition to winning the Pulitzer, Hemingway was the recipient of the Nobel Prize in 1954. He died by committing suicide in Ketchum, Idaho on July 2, 1961. 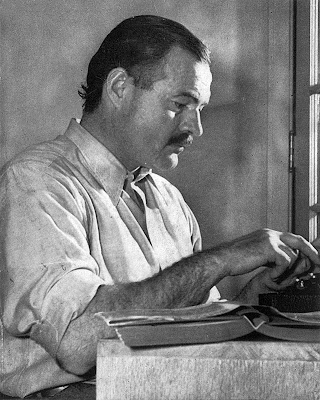 After his birth, Ernest Hemingway spent much of his youth in a conservative Chicago suburb. However, his parents (Grace and Clarence Hemingway) also raised him in northern Michigan. There, Hemingway learned to fish, hunt, and appreciate the natural environment.
During his high school era, the budding writer worked for his school newspaper. While working for Trapeze and Tabula, the majority of his writings were about sports. Once he graduated, Hemingway began working for the Kansas City Star. This work helped Hemingway attain a level of experience that would greatly influence his minimalist prose style. In discussing the time he spent at the Kansas City Star, Hemingway has remarked that it was here that he learned to write simple sentences. He found this to be very useful and stated that working for newspapers was not a harmful enterprise for youthful writers as long as they got out of the field in time.

Ernest Hemingway relocated overseas in 1918 for the purpose of serving in World War I. He also worked for the Italian Army as an ambulance driver. He was given the Italian Silver Medal of Bravery for his service. Because of sustained injuries, he also spent time in a Milan-based hospital. While there, Hemingway met Agnes von Kurowsky. Although the nurse originally accepted his marriage proposal, she subsequently left him to pursue another love interest. This love failure left Hemingway devastated. However, it functioned as the source for works such as A Farewell to Arms and “A Very Short Story.”
Hemingway returned to the U.S. at the age of 20 while still coping with the brutalities of the war. Upon returning, Hemingway spent some time working at the Toronto Star. While in Chicago, he met his future wife, Hadley Richardson. They married and then relocated to Paris. Here, Hemingway worked for the Star as a foreign correspondent.

While in Paris, Hemingway quickly began playing an integral role in the literary sector that Gertrude Stein referred to as “The Lost Generation.” As Hemingway’s mentor, Stein enabled him to meet a wide range of talented authors and artists. Some of them included James Joyce, Pablo Picasso, Ezra Pound, and F. Scott Fitzgerald. Then, in 1923, Hemingway and his wife gave birth to their son, John Hadley Nicanor Hemingway. At this point, Hemingway also started attending Pamplona, Spain’s Festival of San Fermin.
Hemingway and his wife took a trip to the Festival of San Fermin in 1925 with a group of American and British expatriates. It was this trip that would function as the premise of Hemingway’s first narrative, The Sun Also Rises. This novel is generally considered to be Hemingway’s most impressive work, in large part because it offers a poignant look at the postwar disillusionment that came to define his generation.
Following the publication of The Sun Also Rises, Hadley and Hemingway divorced. The divorce is attributed to Hemingway’s affair with Pauline Pfeiffer. Pfeiffer became the writer’s second wife following the finalization of his divorce to Hadley. After these events, the author continued writing. At this point, he spent time completing a collection of short stories, Men Without Women.

Following their marriage, Hemingway’s wife became pregnant. Shortly thereafter, the couple chose to relocate to America. In 1928, their son Patrick Hemingway was born. The couple then spent summers in Wyoming while settling in Key West, Florida. Throughout this period in his life, Hemingway completed A Farewell to Arms. It is this novel which secured Hemingway’s position in the literary canon.
When not writing, Ernest Hemingway devoted much time to deep-sea fishing, bullfighting, and big-game hunting. During the time he spent reporting about the Spanish Civil War, the author met Martha Gellhorn. Gellhorn was a fellow war correspondent. It was during this 1930s era that Hemingway also compiled the material for what would be his next book, For Whom the Bell Tolls. The author was eventually nominated for a Pulitzer Prize for this novel.
Around this era, Hemingway’s marriage to Pfeiffer began to deteriorate. After Pfeiffer and Hemingway divorced, he married Gellhorn. The couple then bought a farm close to Havana, Cuba. This home would function as their primary residence during the winter season.
In 1941, America entered World War II. It was during this time that Hemingway worked as a correspondent. He took part in several key moments of the war, one of which included the D-Day landing. As the war began coming to a close, the writer met Mary Welsh. After divorcing Gellhorn, he went on to marry her.
Hemingway wrote The Old Man and the Sea in 1951. This is likely the author’s most famous novel and eventually won him the Pulitzer Prize.

Throughout his career, Hemingway continued his exploration of Africa and sustained numerous injuries while there. He also survived several plane crashes.
Hemingway earned the Nobel Prize in Literature in 1954. During this apex of his career, Hemingway began struggling with serious illnesses. In addition to dealing with depression, Hemingway sought treatment for liver disease and high blood pressure.
After writing a memoir entitled A Moveable Feast, Hemingway chose to retire in Idaho. While there, he continued battling with both physical and mental health issues.
On July 2, 1961, Ernest Hemingway killed himself in his Ketchum residence.